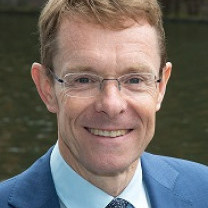 Andy Street was elected as the first Mayor of the West Midlands on May 4 2017. The primary function of the role is to chair the West Midlands Combined Authority and brings with it significant powers over transport, housing, skills and jobs. Before becoming Mayor, Andy combined a career with John Lewis, Britain’s most successful workers’ co-operative, with a host of high-profile economic development roles, working with local and national government. He was the Chair of the Greater Birmingham & Solihull Local Enterprise Partnership between 2011 and 2016, helping to build the relationships that have underpinned the economic growth of the region. Additionally, he has been lead non-executive director for the Department for Communities and Local Government as well as a member of the Prime Minister’s Business Advisory Group.

In June 2015, Andy was awarded the CBE for services to the national economy. He was named the ‘Most Admired Leader’ of the year by business magazine, Management Today in 2014. He received the ‘President’s award’ from the Greater Birmingham Chambers of Commerce for his work in the region. 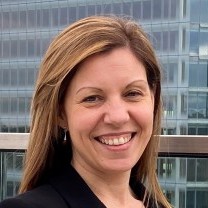 Christine Dryden is a Partner of Arcadis LLP. A Chartered Surveyor with over 25 years experience, Christine has led numerous large scale client commissions and managed a number of consulting businesses. Her focus is on creating high performing teams that exceed customer expectations.

Andy Street, formerly Chief Executive of John Lewis, has been the Mayor of the West Midlands for 3 years. During this period, the region has seen massive growth, underpinned by £2.7bn of Government investment. It will host the Commonwealth Games in 2022 and has seen Coventry awarded the City of Culture. A business case has been made to secure further Government support, with a plan to invest £3.2bn over the next 3 years to stimulate the economy for the short term, in ways that will also support a long-term sustainable recovery, that is both green and more inclusive. So how will this roll out? What are the priorities and how does the Mayor see the future shape of the region? In this exclusive interview there will be the opportunity for you to ask the Mayor questions and gain a good insight into the prospects for the largest UK economy outside of London.